The day before my very first chemo treatment I decided to spend my last day as a normal person, doing some of the everyday things that I love the most. My objective: to have fun and not worry about the next eighteen weeks of chemo.

First things first: I slept in late. It was heaven. I lounged around until 10:00AM or so, read a book, checked my email, blog posts, and Facebook, then finally decided to get up and take a shower. There was no hurry.

It wouldn’t be a day as a normal person unless I went to Target. I love Target. My motto has always been: If you can’t get it at Target, then you really don’t need it. And no, Target is not sponsoring this post. (Neither is Cane’s.) I bought a bunch of things I would consider “cancer snacks,” which was really nothing more than stuff that sounded good at the time: gummy fruit snacks, chocolate pudding, nutty protein bars, and a big bag of pistachio nuts. I had no idea if I would really want to eat any of this stuff if I felt nauseous from the chemo, but we would certainly find out.

After Target, my son’s girlfriend made a chocolate cake with vanilla frosting, my favorite. We had both been craving something sugary all week, so she was kind enough to make it. I had a huge piece and loved every single bite before dinner.

I spent a little time watching TV, relaxing, and gathering my thoughts about the next day. I was nervous, but not unnecessarily so. I wasn’t afraid, but felt uncertain about what it would really be like, and if it would be as bad as everyone said it would be.

The best people in the world!

I met a group of running friends for dinner at a small, local restaurant. We had been trying for several weeks to have a Ladies Night Out, but somehow Bill and Anil crashed the party and became honorary girls for the night. It was such a great evening, filled with talk of running, being sick, our lives, a little gossip, and exclamations over how good the food was. I had a tasty dinner salad with an excellent risotto with shrimp.

To end the night, all but two of us piled into our cars and went to see the movie Before Midnight. I loved the first two films, Before Sunrise and Before Sunset, and had been looking forward to the next installment for years. Literally, years. Maybe it was because being a normal person was exhausting, or because my mind was on the next day’s first chemo session, but I was disappointed. Maybe it was the build-up. Maybe I’m too much of a hopeless romantic. I still liked the movie, and should probably see it again in a different frame of mind and when I’m less worn out, but I found the talk exhausting. Maybe the pushing forty Jesse and Celine were both just a little too real this time for me.

I’m tired of real. I have enough real on my plate right now to last me a lifetime. 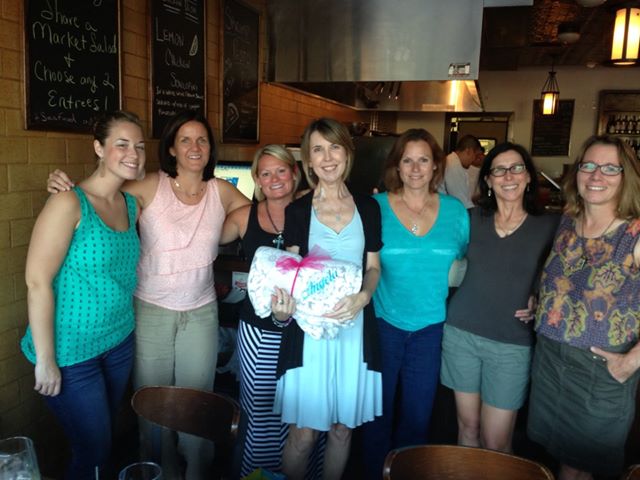 I’m holding the beautiful blanket Heather gave me, inscribed with my name.

To top off my last day as a normal person, my daughter arrived from Portland to be here for me during my first two chemo sessions. In case I haven’t mentioned it before, I have the best daughter and son in the world. Having them both here to help me through this, along with my husband and my son’s girlfriend, not to mention my awesome friends, has been the biggest blessing of my life so far.

It was a perfect day.

Bring on the chemo!